In Bialik’s poem, the Matmid, there is both a collective of students and a “lonely voice,” chanting solo at night:

His comrades three await him in his place,
They, who have been his friends since first he came:
The burning light, the desk, his Talmud text.
— HaMatmid [The Talmud Student], Helena Frank, trans.

See also, Reiss’ illustration of this passage at right.

According to one biography, and several articles on Lithuanian yeshivot [academies] of the late 19th Century, this is a direct reflection of author’s experience. Chaim Nachman Bialik (1873–1934; also: Haim or Hayim) studied in Volozhin in the late 1880s, where several, somewhat competing, educational forces were at work:

1) “Bialik was no longer alone with his sacred books in the vacant synagogue of his hometown,” writes biographer Sara Feinstein of Bialik’s arrival in Volozhin. “Now he felt part of a mighty force of hundreds of talmudic scholars whose voices rang with fervor and exhilaration.” (Sunshine, Blossoms, and Blood, p.43; more below)

It was said that he once admonished a Matmid who went to extremes by denying himself food and sleep:

In your obsessive studying you do not have time to become a scholar. When you cease to exaggerate your being a Matmid, going without food or sleep, you will begin to know Torah.

3) The yeshiva’s founder, Rabbi Chayyim (the elder) Soloveitchik, ancestor of the master of Bialik’s day, “had decreed at the time of the Yeshivah’s founding that learning must go on twenty-four hours a day: ‘The sound of leaning must not cease to be heard within its walls.’ All students were required to take shifts in learning during the night, over and beyond the regular schedule of lectures and recitations…” (Feinstein, p.38)

Feinstein goes on to quote a description of a yeshiva day around the time Bialik was there:

Every student, no matter what age, is expected to attend the Shaharit (morning service) at 8:00 a.m. At the conclusion of the service some may return to their lodgings fo breaksfast, others remain in the study hall…Following Ma’ariv (evening service) students return to their lodgings for their evening meal. Some return to the Yeshivah to study past midnight, others sleep until 3:00 a.m. when they return to study until morning.
— Feinstein, again, p.38
citing Berdyczewski, “Toldot Yeshivat ‘Ets-Hayyim,” ha-Asif (1887): 237

Why is Bialik’s Matmid Alone? (Reprise)

Knowing the strong tradition of Jewish learning in groups, particularly pairs, I wondered in this blog, a few days back, why Bialik’s student is alone: is this a literary device? a reflection of personal isolation? a homelitical warning?

Apparently there is something of a controversy today about educational practice in the 19th Century, with some debate about when and where paired study called “hevruta” was used. See “Three Partners in Study” and “Learning in Pairs.”

— and, in support of paired study, I note that it was my study partner who read through the latter citation finding material pertinent to the question I was asking…points I had missed, even while citing the article! —

Even if hevruta study was regularly employed at Volozhin, however (which appears debatable), it seems that Bialik’s poem reflects the odd, late-night vigils required of students there.

So that answers the basic “why is he alone?” question, and it provides additional background for understanding the poem, HaMatmid. Deeper layers of the question remain. And “What’s wrong with this picture?” has a different resonance.

With gratitude to my many partners in study, past and present, long-time and newer.
And with special thanks to my chevruta, Amy Brookman.

Hebrew. The full Hebrew text is available at Project Ben-Yehuda, which “aims to make accessible the classics of Hebrew literature (poetry and prose, but also essays, letters, memoirs, and reference works) to the reader of Hebrew.”

English. An English translation, posted for educational purposes and covering much of the poem, is available at Poetry Nook. 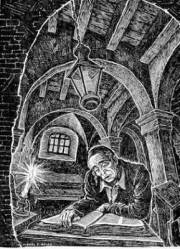 The Hebrew Poetry group at Temple Micah (DC) is exploring some works of Chaim Nachman Bialik (1873–1934; also: Haim or Hayim). So I have recently discovered “The Talmud Student,” one of his most famous poems. I find it fascinating and powerful. But it leaves me with one large question I’m hoping someone(s) can help me answer.

Some read this poem as pure ode to Talmud study:

The ideal Torah student is constantly studying. His is the image portrayed by the great poet Chaim Nachman Bialik in his masterpiece, HaMatmid [The Talmud Student]. There he describes the night and day devotion of the young man to his studying task in moving and inspiring terms. For Bialik, himself once a yeshiva student, the “Matmid” is the true hero of Jewish history.
— Rabbi Tzvi Hersh Weinreb, VP emeritus of the Orthodox Union

It is also, perhaps more commonly, read as a statement of “great ambivalence” toward the way life in the Lithuanian yeshiva of the late 19th Century CE. (See, e.g., this Jewish Virtual Library note.)

The poem is frequently understood as referencing concerns about insularity in the yeshiva world, as in this contemporary opinion piece by Shmuel Winiarz.
END_OF_DOCUMENT_TOKEN_TO_BE_REPLACED