In 1973, Charles Shelby Rooks floated the “untested suggestion about a possible new image” for Black Theology:

that of an African Diaspora based on the Biblical story of the Babylonian Exile and the final Jewish Diaspora. It is to the end of the Biblical history of Israel that black America must look rather than to the beginning.

From Charles Shelby Rooks, “Toward the Promised Land: An Analysis of the Religious Experience of Black Americans” IN The Black Church (journal of the Black Ecumenical Commission of Massachuesetts) 2 (1972): 1-48. This quote appears, amid discussion of “Diaspora” at the close of the 20th Century, in the conclusion to Conjuring Culture: Biblical Formations of Black America, Theophus H. Smith. NY: Oxford University Press, 1994.

Cone, Mitchell, Roberts, and some others see parallels between the experience of Israel of the Old Testament, and that of Black Americans within America. But the Exodus Model is not the only one made use of by other Black theologians. For instance, Shelby Rooks (of the University of Chicago Divinity School) critiques the Exodus Model and sees it as inadequate for explaining major aspects of Black Experience. Instead, he opts for what, to him, more satisfactorily accounts for our experience. To him, Blacks should be viewed as in exile (another biblical idea) and he proposes to call his model, the “Diaspora Model.”
— Bentley, in Black Theology A Documentary History, p. 238

Full article/book citation below, along with a few details on Cone, Mitchell, and Robert. End note here references Charles Shelby Rooks. “Toward the Promised Land: An Analysis of the Religious Experience of Black Americans.” The Black Church (journal of the Black Ecumenical Commission of Massachuesetts) 2 (1972): 1-48.

And there is the view of William Jones. To him, neither the Exodus Model nor the Diaspora Model have substance. If there is divine intervention at all, it is so ambiguous as to be irrelevant. To base the case on the Exodus Model gains nothing, for even in the case of Israel, it has historically proven nothing. Israel has suffered at least as much at the hands of the nations as she has experienced deliverance at God’s hand. Thus Jones injects the problems of theodicy into the discussion and tentatively resolves the issue by coming up with, if not a limited God, one who is not sure on which side to intervene. In true William Jones fashion, he comes up with the idea that if Black people or any other people depend solely upon the supposed will of a God, limited or otherwise, for their deliverance, they will exhibit the same ambiguous collective experience as did the Jews, Afro-Americans, and any other oppressed and powerless group. The best, and safest, thing to do is to get on the battlefield and assist God in gaining the victory! Thus Jones’ model is called the “Humanocentric” in distinction to the others, which are theocentric.”

CITATION:
William H. Bentley. “Factors in the Origin and Focus of the National Black Evangelical Association” IN Black Theology: A Documentary History Volume one: 1966-1979. James H. Cone and Gayraud S. Wilmore, eds. Maryknoll, NY: Orbis, 1993. The essay was originally published by the author in 1979.

William H. Bentley (1924-1993) was a minister, college and seminary professor, and a public worker in Illinois. He helped found the National Black Evangelical Association in 1963 and was its president in the 1970s.

James H. Cone (1938-2018), co-editor of the volume in which this quotation appears, is considered the founder of Black Theology. Here’s a bio from Union Theological Seminary.

Henry H. Mitchell (b. 1919), long-time professor and writer on preaching and Black Theology, argued in 1968 (see page 445 in Cone/Wilmore), that “the distinctiveness of Black religious culture is not only a rich source for the development of a new Black theological tradition, but also contains insights for the White Church as well.” Learn more about Mitchell from this foundation.

Rev. J. Deotis Roberts (b. 1927), has written and taught about Black Theology, stressing opportunities for dialogue and reconciliation, for decades. He also established the Foundation for Religious Exchange (FREE), which operated between 1974 and 1994.

Moshe Sokolow, a professor at Yeshiva University, is unapologetic in focusing solely on orthodox scholarship. He mentions the Documentary Hypothesis only in order to explain why and how orthodox scholars responded to it. Nehama Leibowitz stands out as the only female scholar discussed in depth, although more are cited in passing. Non-orthodox readers willing to accept those basics will find a refreshingly straightforward and thoroughly readable “manual” for understanding how the bible has been interpreted over the centuries by orthodox Jewish teachers.

Sections on pedagogy can be of use to non-orthodox readers who want to understand how the Torah is read and applied in the Modern Orthodox world. Earlier chapters cover a lot of territory, including the use of Aggadah, Semitic languages, Ancient Near East literature, “literary sensitivity,” and other approaches to the text. Along the way are a number of specifics relevant to #ExploringBabylon. See, for example, his theory about “Ezekiel and the Book of Job.

“There has been a veritable revolution, and possibly more than one, in biblical studies over the past generation….questions have led to a dramatic reexamination of the very nature of the biblical account, including both its literary quality and the ideas expressed in it.

“These challenges did not emerge in a vacuum. The concerns they raise reflect issues that plague our society as a whole….

“Meanwhile the fact that the Bible plays a significant role in several quite different communities forces those studying it (at least to the extent that they interact) to think about how it is treated in each tradition. And so the Bible’s role within religious communities has itself become a topic of inquiry as much for those within such communities as for those outside them.

“The goal of this book is to share these conversations, which have been going on in academic circles for decades, with a larger audience.”
— from the preface

Extra Note: The volume I’m reading comes from the library of Max Ticktin, z”l, and includes some of his pencil notes — which create a bit of on-going, if cryptic, counsel. I am grateful to Max (1922-2016), who retired from teaching Yiddish and Hebrew literature in 2014, for all he taught so many of us in- and outside the university. I miss him every day that I struggle through this project.

For more on this song, see “Babylon and the Writing on the Wall.”

Johnny Cash’s “Belshazzar” (1964) is a relatively straightforward re-telling of the biblical story, although it adds a detail not in the Tanakh (or in famous depictions, such as Rembrandt’s): the writing is in blood.

Wikipedia lists many more literary and artistic renderings and references.

“Noting that Israel’s earliest responses to earth-shaking changes were cast in the powerfully expressive language of poetry, Hugh R. Page Jr. argues that the careful collection and preservation of these traditions—now found in every part of the Hebrew Bible—was an act of resistance, a communal no to the forces of despair and a yes to the creative power of the Spirit.

“Further, Page argues, the power of these poems to craft and shape a future for a people who had suffered acute displacement and marginalization offers a rich spiritual repertoire for Africana peoples today, and for all who find themselves perennially outside the social or political mainstream. Here Page offers fresh translations and brief commentary on the Bible’s fifteen earliest poems, and explores the power and relevance of these poems, and the ancient mythic themes behind them, for contemporary life at the margins.”

Rev. Page is professor of Theology and Africana Studies at Notre Dame University. He also serves as vice president, associate provost, and dean of the First Year of Studies. He is general editor of The Africana Bible: Reading Israel’s Scriptures from Africa and the African Diaspora and author of the Exodus section in the People’s Bible Commentary (both from Fortress Press).

As the title suggests, this book focuses on Psalm 137, which Stowe explores in three parts:

The discussion explores Babylonian Captivity and Jewish experience of Babylon, but it also examines cultural uses of the psalm, particularly in U.S. history. Stowe uses personal interviews and textual analysis as well as in-depth exploration of the psalm in music.

The book is enjoyable and informative. It’s important to note that, like several other sources cited on this blog, Stowe relies heavily on Christian scholarship. In fact, his statement, “I rarely meet people who can immediately identify Psalm 137,” causes me to wonder how many Jews he meets. (My acquaintance includes many Jews who regularly recite the entire book of psalms and include Psalm 137, in particular, in after-meal blessings on many everyday occasions — although, of course, practice and interests vary.)

Additional material, including musical settings and videos, is available on his website.

Albertz, Rainer, Israel in Exile: The History and Literature of the Sixth Century B.C.E., translated by David Green (Atlanta: Society of Biblical Literature, 2003).

A review in the Journal of Religion calls this book a “biblical, historical, literary, and theological masterpiece.” Albertz is a Christian scholar of “Old Testament,” trained in Protestant Theology at Heidelberg. (See also “Babylon and the Beginning.”) His training is evident throughout this work, but he offers a lot of background and insight focused solely on Tanakh.

Using biblical text and materials of the Neo-Babylonian period, Albertz explores life for exiled Judeans in Babylon. The first two sections, “The Biblical Picture of the Exilic Era” and “The History of the Exilic Era,” offer plenty of detail (in 138 pages).

The next section, “The Literature of the Exilic Period” (roughly two-thirds of the book), analyzes biblical text. Albertz shares detailed insights about the vision and world view behind various narratives and prophecies, but the reader has to work to get to them: The bulk of the discussion involves assigning portions of the Tanakh to appropriate documents, such as “PH (Patriarchal History)” and “JerD (Deuteronomist Jeremiah).”

The final section on “Theological Contribution” is overtly Christian.

Citations to scholarship in German and other Christian sources are unlikely to be helpful to many readers of this blog.

Another note: If anyone reading this knows of volumes of any comparable depth by Jewish studies authors — especially ones that are not $140 for an ebook or $300 for print — please advise. Titles local college libraries are likely to stock also most welcome.
BACK

Babylon is a surprisingly multivalent symbol in U.S. culture and politics. Political citations of Babylon range widely….A composite biblical figure, Babylon is used to celebrate diversity and also to condemn it, to sell sexuality and to regulate it, to galvanize war and to worry about imperialism.
— abstract

Runions devotes 300 pages to unpacking various uses of Babylon in U.S. culture and politics. Her work, to be clear, is not about Judaism, although she focuses on the Hebrew bible; her essays encompass Christian scriptures and interpretations, as well as details that, while illuminating, are otherwise beyond the scope of this project. Still, recommend The Babylon Complex and hope to explore some of its ideas in #ExploringBabylon.

This classic study focuses in on the period 700-530 BCE, both as an era, in itself, “so pregnant with events that shaped the face of the ancient world” (p.2) and as somewhat representative of two and a half millenia of the region’s history. The chosen period is also, more pragmatically, a period about which more is known that other eras of Mesopotamian history.

Reviewers called Babylon “a pertinent, accessible study, more lively than scholarly,” and “a first-rate guide to a fascinating ancient civilization that continues to influence us today” (Kirkus and Publisher’s Weekly, respectively).

It has also been noted that Babylon over-reaches, giving too much credit to Mesopotamia in terms of influence on later cultural developments (The Independent). This is something to keep in mind while enjoying this thoroughly readable, insightful — and occasionally funny — book on an otherwise formidable subject. 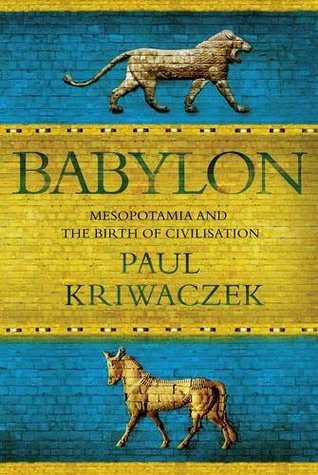 Paul Kriwaczek (1937-2011) was a BBC journalist for 25 years and head of central Asian affairs for the BBC World Service. Here are two touching obituaries at The Guardian and The Independent from colleagues who knew him.