Murkiness does not persist for long in biblical narrative. For only one verse, “the earth was unformed and void, and darkness was upon the face of the deep; and the spirit of God hovered over the face of the waters.” After that, God begins a program of dividing [“va-yavdil” וַיַּבְדֵּל]: light from darkness, waters above from waters below, water from dry land,….six days of work from the hallowed seventh. The theme of division continues throughout Genesis, in the stories of Noah, Babel, Abraham and descendants. Exodus and Leviticus stress divisions relating to food, sex, and other topics: this is kosher; this is not.

The biblical concept of “holiness” is all about separations; and the ancient Rabbis further pursued divisions and borders, beginning with the first words of the Mishnah: “From what time may one recite the Shema in the evening?”

Murkiness is studiously avoided in Jewish tradition. And deceptive or confusing characteristics are particularly reviled, as when a pig “pretends” to be kosher by showing its split hooves (a characteristic necessary for a kosher animal) while hiding the fact that it does not chew the cud (also required).

How, in such a worldview, can an individual who is “neither one nor the other” — like the title character of the I.B. Singer’s 1962 Yentl the Yeshiva Boy — function?

And how is Judaism, with its separations and borders, to respond to the murkiness of gender-fluidity?

Yentl, in referencing Jewish sacred text, becomes part of the age-old conversation on those texts, their interpretations and implementations. Like commentary in every age, Theater J’s Yentl brings contemporary perspectives, needs, and questions into dialogue with centuries of existing material. This happens partly as the tale — set in late 19th Century Poland — interacts with music aware that the shtetl is no longer the only model for Jewish gender roles. In addition, the set, designed by Robbie Hayes as an open book, urges us into the dialogue as well.

Theater J‘s presentation combines the 1975 play, co-written by Singer and Leah Napolin, with newer music from singer-songwriter Jill Sobule. This “play with music” (not “musical” for legal reasons), directed by Shirley Serotsky, differs substantially from the 1983 film created by Barbra Streisand. And, while it comes closer to the original story in many ways, it differs from that, too, in interesting ways.

Sailing, or Singing, Out of the Margins

The musical ends with the main character leaving for America. Singer, in an “interview” of himself published in the New York Times when the film was new, suggested that this was like putting Madame Bovary on a cruise ship or marrying Anna Karenina to a Wall Street millionaire. He wondered if the film Yentl would end up working 12 hours/day in a sweatshop, forced to leave behind all the learning she’d sacrificed so much to pursue. For fans of the film, however, Streisand’s Yentl was sailing into the exciting new landscape of women’s learning…

…in the U.S. of 1983, Drisha Institute was offering women full-time learning; women were preparing for ordination in the Conservative movement, and were already serving as rabbis in the Reform and Reconstructionist movements. (Women had also been admitted to Ivy League schools and could generally run a marathon without being attacked. In the U.S. of 1902-ish, not so much.)…

In the story, Yentl/Anshel tells Avidgor, “I’ll live out my time as I am,” and, in distress and confusion, disappears from view. Readers know the baby is named Anshel, but in the play with music, Anshel knows this as well. This and a song about moving on make his departure less bleak. From a standpoint less personal to the character, villagers sing “You’re not alone…you’re not so strange…” — a sentiment uniting Yentl with women and others long marginalized by traditional text.

One reviewer found Theater J’s production of Yentl “like a body with two brains: a play and a musical of clashing styles forced to inhabit the same space.”

Could you imagine a world of women only
the interviewer asked. Can you imagine

a world where women are absent (He believed
he was joking). Yet I have to imagine

at one and the same moment, both. Because
I live in both. Can you imagine

the interviewer asked, a world of men?
(He thought he was joking). If so then,

a world where men are absent?
Absently, wearily, I answered: Yes.
–Adrienne Rich

If there’s any clash between play and music — and there is, as when Anshel turns to the audience and launches the song, “O shit,” as his wedding approaches, or when a pair of madrigals closes a tune about the biblical David and Jonathan being “very close,” with “if you know what we mean” — it furthers the kind of communication across the decades that arises for contemporary Jews engaging an older text, especially one that left them invisible or misunderstood.

Other reviewers had interesting things to say about this production. Perhaps more on this later. Meanwhile, back to the murkiness.

The current Yentl production engages contemporary voices, particularly through song, with the older story and still older ideas about gender roles. The film Yentl is a woman forced by circumstance into a cross-dressing masquerade to achieve a particular goal and never exhibits anything but heterosexual feelings. Theater J’s Yentl, following the story, worries early on about the effect of cross-dressing: “By doing so, one deceived not only others but also oneself. Even the soul was perplexed, finding itself incarnate in a strange body.” Later, Anshel is drawn physically and emotionally to both Hadass and Avidgor.

In the LGBT community, the B’s and the T’s are often left behind in wake of present activism, and, when Ari Roth [Director, Theater J] mentioned the “gender fluid” in his preshow speech, the uncomfortable laughter of the audience said everything about the distance that our society needs to come.

No doubt Jewish communities have work to do on this effort, as do others. Toward this effort, it might be worth considering that, despite Genesis’ obvious predilection for dividing and naming, when the idea of “God’s image” first appears, it is in a plural jumble of male and female:

וַיֹּאמֶר אֱלֹהִים, נַעֲשֶׂה אָדָם בְּצַלְמֵנוּ כִּדְמוּתֵנוּ
And God said: ‘Let us make man in our image, after our likeness

“Trans*” is geek-speak for a whole range of terms, as described in this graphic. 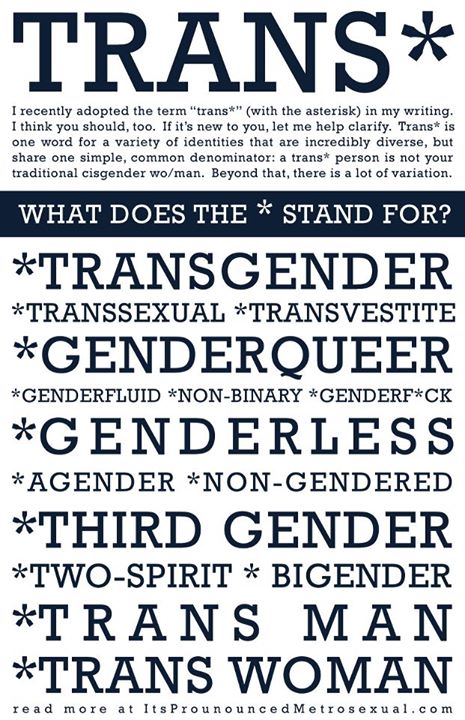