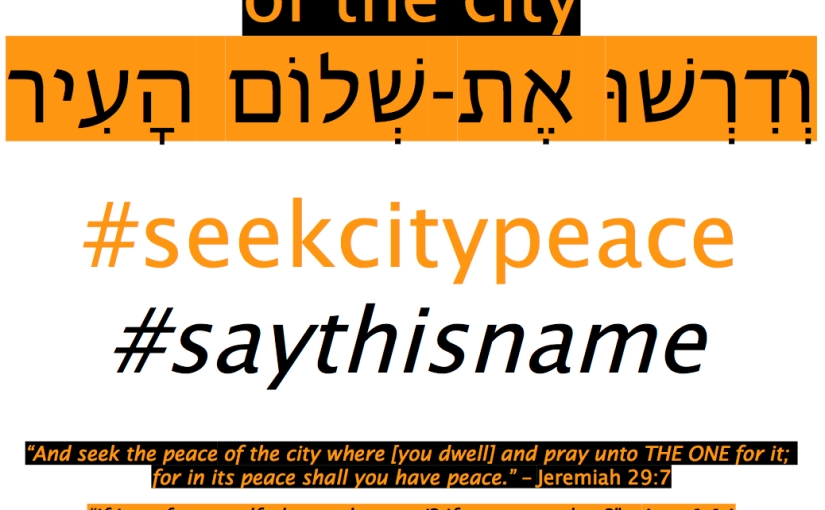 Houses of worship across the United States are separated by many things: culture, religious denomination, style of prayer, theology and language. We’re also separated by demographics and location, even in the same town.

I believe it was DC’s former police chief Isaac Fulwood who noted that 10 a.m. on Sunday is the most segregated hour of life in the city. Of course, many things have changed since Fulwood’s tenure in the late 80s — and Jews, as well as some other religious communities, don’t hold their biggest weekly worship on Sunday. But his basic point remains.

The relative segregation of our lives and our worship communities means that, in cities like the District of Columbia, some communities mourn violent deaths with terrible regularity while others, in the same city, remain largely unaffected.

It has been one of my deepest prayers that we can find ways, in our various worship communities, to ensure that our worship reflects the welfare of our own city, specifically, while never losing cite of our wider place as citizens of the world. One place we must start, I continue to believe, is for every house of worship in the city to acknowledge the violent losses of its citizens, even if those lost and their primary mourners are not members of the congregation.

In this past week, the District of Columbia has been bereaved of the following individuals through homicide:

We are still in the 30-day period of mourning for these individuals, lost to homicide:

I personally struggle — as someone who spends much of her time east of DC’s Anacostia river, often worships in the more affluent Northwest part of town, and lives in between — with how far removed some prayer gatherings can seem from the realities of my town.

I know my experience in the District of Columbia is repeated countless times across the country in other locations. And yet the prophet Jeremiah instructed

Seek the welfare of the city where [you dwell], and pray to THE ONE on its behalf; for in its welfare you will have welfare.

Michelle Obama reminded us, when she spoke in 2013 about the shooting death of Hadiya Pendelton in her (and my) original hometown, that the perpetrators, too, have frequently experienced violence “every single day” of their lives. (See also “Stragglers.”)

And so, I pray — and ask that others join me:

We pray for those lost recently in our town, for their families and friends, and for all affected by the act of violence.

We are stumbling and deserving of rebuke for every life lost to violence, direct or indirect, in our own town. Teach us to recognize ways in which the life of our town does not honor the humanity of all who dwell and sojourn here. Make us particularly sensitive to scourges of racism, poverty, and gun violence. Enlighten our eyes to ways more in tune with the spirit of divine love.

Keep us especially mindful: when young people suffer injustice or die in violence, it is the elders who have failed. In honor of the many who do not thrive or survive, help us redouble our prayers for justice and peace.

If you’re joining in private or congregational prayers for those lost in the District of Columbia, please add a word in the comments. Then share this message.

If you’re joining in private or congregational prayers for those lost in your own city, please add a word in the comments. Then share this message.

If you have additional resources to share, please do so.

If not now, when?