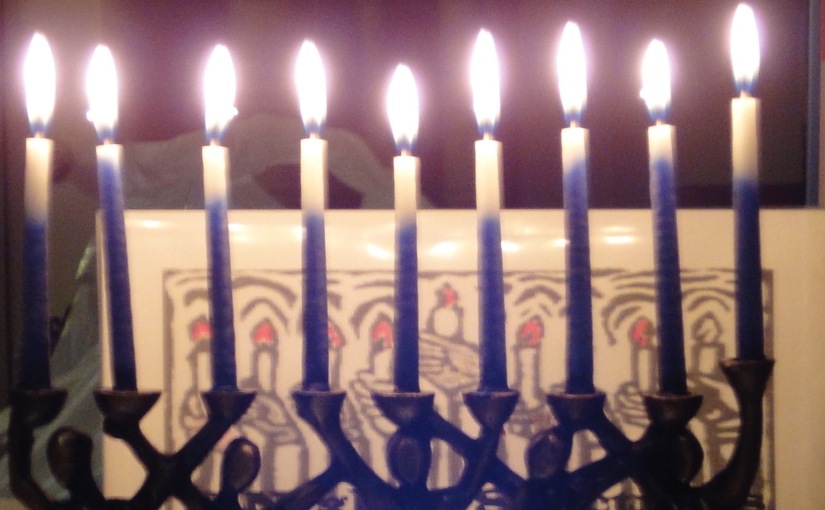 In “Hanukkah for Grown-Ups,” Marianne Novak describes “adult initiative” needed to see rebellion as “the only viable option for the future of the Jewish people.” The previous post here noted a parallel with Psalm 30’s moments of terrifying uncertainty, as well as some challenges involved in relying on “a small section of the Jewish community to see” the way forward in terms of political action. (Details on Novak and publication below; see also previous “Thirty on Psalm 30” post.) But “adult initiative” comes in many forms. And below are a few related thoughts from another teacher.

How Big Was the Miracle?

Why do we celebrate eight nights as a “miracle,” when we are told that there was available purified oil “sufficient for one day’s lighting” (B. Talmud Shabbat 21b): Wouldn’t that make the additional seven nights miraculous but the first night ordinary?

Since Joseph Caro (16th Century, Safed; mystic and codifier of laws) posed this question — now often called “Beit Yosef’s Question” — many responses have been offered. Most of those I’ve read — and here are 25 answers distilled from many more — focus on the legal/logistical aspects of the question.

I am more interested in a more basic question…what Novak describes as the miracle of Jews seeking to rededicate the community through “being conscientious and thoughtful Jewish adults.” That, it seems to me, is the miracle of the first night: a group of Jews deciding, in less than ideal conditions, to create light where there was none in the faith that it would grow.

Hanukkah and Year Round

In his book, Seasons of Our Joy, Rabbi Arthur Waskow summarizes the two, sometimes apparently contradictory, aspects of the holiday:

He then suggests that we see Hanukkah (using his spelling from here on for simplicity) as a time of darkness of both sun and moon, both military and cultural disaster, on the one hand, and spiritual darkness on the other:

The miracle at the Temple came at a moment…when even military victory had proven useless because the Temple could not be rededicated in the absence of sacred oil….

The real conflict is not between the Rabbi and the Maccabee, between spiritual and political, but between apathy and hope…

Seen this way, Hanukkah can become a time for accepting both the Maccabee and the Rabbi within us, seeing them as different expressions of the need to experience despair and turn toward hope. Seen this way, Hanukkah can become a resource to help us experience our moments of darkness whenever they occur throughout the year– and strike new sparks.
— Waskow (Boston: Beacon Press, 1982), p. 100

This view of Hanukkah brings us back to Psalm 30, as Psalm of the Day, prompts us to acknowledge darkness and weeping which “tarries for the night” as well as joy that “comes in the morning.” Moreover, Psalm 30 can be part of Hanukkah as a resource for the whole year, reminding us in the daily liturgy to acknowledge the darkness, insecurity, and weeping we and/or others in our community may be experiencing before we move on to celebrating:

You turned my mourning into dancing;
You loosed my sackcloth, and girded me with gladness;
So that my glory may sing praise to You, and not be silent;
O LORD my God, I will give thanks to You for ever.
— verses 12-13 (1917 JPS slightly adapted)

24 of 30 on Psalm 30
No Longer National Novel Writing Month, but continuing the focus on Psalm 30 (“Thirty on Psalm 30”) begun as a NaNoWriMo-Rebel project. Whole series (so far).

NOTE:
A bio for Marianne Novak appears at Maharat Yeshivat, where she is in the class of 2019. Her dvar torah was published as part of The Jewish Orthodox Feminist Alliance‘s “Shema Beoklah: Hear Her Voice” series. Earlier installments in the series are available online. publication is available