Some thoughts and resources for exploring the Torah portion, “Metzora,” Leviticus 14:1-15:33. Also spelled: M’tzora or M’tsora, sometimes Metsora or Mezora. This is part of a series of weekly “gathering sources” posts, collecting previous material on the weekly Torah portion, most originally part of a 2010 series called “Opening the Book.”

Metzora is next read beginning at minchah on Shabbat 4/6/19 (Shabbat Tazria). NOTE: Although most there are usually four posts for a portion, this series was written in a year when Tazria and Metzora were read together as a double portion, so there are only two posts on Metzor (and two on Tazria).

Something to Notice — How “natural” or ordinary was menstruation in the ancient world? 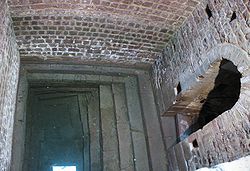 Pool of a medieval mikveh in Speyer, dating back to 1128 (Chris 73, Wikicommons)