No one knows for certain what the ancient rabbi meant when warned his fellow mystical travelers against saying “Water! Water!”:

When you reach the stones of pure marble, don’t say, “Water! Water!” As it states, “One who speaks falsehood shall not endure before My eyes” [Psalms 101:7]
— Babylonian Talmud, Chagigah 14b

The speaker, Rabbi Akiba, is one of four who “entered Pardes [Paradise],” the only one who “entered in peace and departed in peace.” His instructions are understood as pre-trip warnings to other other three.

Some explanations for Akiba’s words liken pure marble to the place where upper (divine) and lower (mundane) waters meet, arguing against attempting to divide divine and mundane. Many teachings focus on dualisms, warning against dividing God into Light/Dark, Good/Evil, etc.

But Michelle Obama spoke, back in April 2013, to what I consider the most dangerous dualism of all: allowing some of our citizens to grow up “consumed with watching their backs” while others grow up enjoying a city’s riches.

Accepting such a state of affairs implies two sets of rules or, worse, two sets of expectations for human beings. This is tantamount to bowing to two gods.

At the “place of pure marble” — where the Torah tells us all humans are in God’s image — we must acknowledge that “every single child in [Chicago or any city] has boundless promise no matter where they live.” Failing to do so is blasphemy of the deepest kind, it “speaks falsehood” that cannot endure before God’s eyes.
— from Fabrangen Havurah‘s omer-counting blog, 2013

Meanwhile, Chicago, my first hometown, has lost so many to street and police violence, as has DC, my adopted hometown of 27 years. Losses across the country mount at a rate so high as to be numbing.

And this does not even begin to address suffering of, and long-term affects in, communities experiencing grief upon grief. Nor does it approach the dual reality Mrs. Obama described in our mutual hometown:

Today, too many kids in this city are living just a few El stops, sometimes even just a few blocks, from shiny skyscrapers and leafy parks and world-class museums and universities, yet all of that might as well be in a different state, even in a different continent.
— Michelle Obama, April 10, 2013 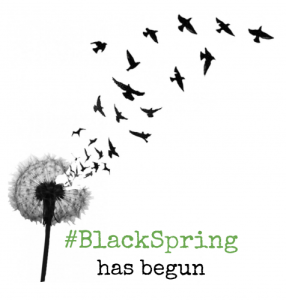 As discussed previously, this week’s attribute, Hod, is associated with empathy.

But the literal meaning of the word is “Glory.”

May the energy of this attribute impel us, finally, this week, to see that this dual existence is incompatible with God’s glory and “shall not endure before [God’s] eyes.”

This past winter our people were presented with hollow reforms. This spring we present to the world our visionary demands. Demands that speak to a world where all Black Lives Matter.

This will be our #BlackSpring.
— Ferguson Action

END_OF_DOCUMENT_TOKEN_TO_BE_REPLACED

We passed the mid-point in the omer journey away from oppression, this week, at the same time that Freddie Gray’s death at the hands of Baltimore police evoked response all across the U.S., inspiring the message: #BlackSpring has begun.

There is still much for privileged and oppressed people to learn about how the system works to keep some people down and what it will take to undo that system. And we are still weeks away from Revelation at the holiday of Shavuot. But this seems a moment of turnaround. And I think perhaps we can find a pivot point in considering language — as both a potential stumbling block before (all of us) blind and as a tool for finding a new path.

One of my favorite teachers on Jewish prayer, Max Kadushin, offers some hints for a way forward.

Kadushin describes Jewish prayer, particularly recitation of a blessing, as “an element in a moral experience,” one that engages an individual’s “larger self.” He notes that many Jewish prayers are in the first person plural, even though the pray-er may not, depending on time and circumstances, have the need expressed in the prayer:

How is it that the individual can regard common needs as “his needs,” even when they are not at the same time his own needs at all?

[In recitation of a blessing] not an actual experience, but the sheer knowledge of a common need of man is now the occasion for an individual’s petition and he regards the common need as his need.

The larger self allows an individual to be aware, poignantly aware, that there are others [for example] who are sick; the awareness is so strong that he associates himself with them, though at the same time retaining his self-identity….Self-identity is retained and material circumstances of the individual have not changed; nevertheless, the self has become larger, more inclusive: large enough to include indefinite others and a consciousness of their needs.
— Max Kadushin, Worship and Ethics: A Study in Rabbinic Judaism. (NY: Bloch, 1963), p.108-109

Kadushin also speaks of prayer collapsing time, so that the travails and delights of the past and a future of blessings we have not yet experienced coalesce in the present. It is in this prayer experience, heavily influenced by language, that the seeds of change are nourished.

We counted 26 on the evening of April 29. Tonight, we count…. END_OF_DOCUMENT_TOKEN_TO_BE_REPLACED