One of the things we might notice about Jonah is that he’s a little hard to follow: one minute, minding his own business, in his own land, and next thing he’s on the way to Joppa, on the ship, in the hold, tossed out into the sea, in the fish’s belly; then in Nineveh; and finally sitting outside the city arguing with God about a gourd. In honor of Jonah and his varied travels, these remarks go a number of different places, and, in an even deeper homage to Jonah, I can’t really promise that we’ll understand the point in the end. But I do hope it will be an interesting ride.

When Jonah initially tries to flee from God’s voice, midrash imagines God responding, “‘I have other messengers,’ for it is written, ‘But the LORD hurled a great wind into the sea'” (Mekhilta, etal. see below). And in the final argument, God seems to be telling Jonah, “There are more than 120,000 stories in the great city, and yours was just one…and only for a moment, while you were on my errand.”

Nonetheless, although God uses natural elements as communication devices in this story, God does not choose another prophet to replace Jonah. Moreover, God sticks with Jonah, addressing the needs of one disgruntled prophet mourning the loss of a gourd, even while the fate of hundreds of thousands weighs in the balance.

Overall, Jonah’s tale seems to value him as an individual, putting the fate of an entire city into his hands. On the other, his own concerns are ignored so loudly, the story practically shouts: “Really, it’s just not about you!”

Judy Klitsner, in her book Subversive Sequels, takes a fascinating hybrid approach: She notes that the city’s name — Nineveh (נִינְוֵה), nun-yud-nun-vav-hey – contains the letters of Jonah’s name (יוֹנָה), and she argues that part of Jonah’s charge was to recognize himself in the city, a microcosm of humanity.

At the close of the tale, when Jonah hears, but fails to respond to, God’s final argument, Klitsner among others, hears his silence as hopeful. She says:

It is not clear if Jonah can see himself as one with the world, with the same limitations, the same need for mercy, and the same inexhaustible capacity for improvement.

In this silence lies the hope and the opportunity of ulay [maybe]…of the potential human beings to imagine themselves as other than they have always been and to undertake the courageous task of corrective repair that will reverse their standing themselves before God.
— “The Wings of the Dove,” in Subversive Sequels, p.29

Earlier in the ten days, David Goldston spoke [to Fabrangen Havurah; more below] about the many things we, as readers, don’t know in the Rosh Hashana Torah readings and the many things the characters themselves — Sarah & Hagar, Ishmael & Isaac & Abraham — don’t know or learn only at the end of the tale. While the holiday stresses judgment — God’s judgment of us and our own judgment of the past year — these readings inject a note of uncertainty. Where the liturgy includes stark pronouncement, the readings remind us that there is much we don’t know. There is a need for discernment, of course, but David suggested that we hold that need in tension with an awareness that we rarely know the whole story.

I want to explore how this theme of knowing and uncertainty, judgment and forgiveness, comes to a kind of crescendo in the Book of Jonah.

So much of the book is about knowledge. “The 12 myriad people of Nineveh…don’t know their right hand from their left.” Jonah tells God, “isn’t this just what I said while still in my own land!” — although as far as we know, he never said anything. The sailors, foreign king and subjects, all seem to get the importance of “maybe” in a way that Jonah does not:

Aviva Zornberg is just one of the many teachers who focus on the importance of ulai – “perhaps” or “maybe” – and mi yodea – “who knows?” – to this story:

‘Perhaps’ is a peculiarly Jewish response to the mystery of God’s ways. ‘Who knows?’ speaks of humility and hope and a sense of the incalculable element in the relation of God and human beings….Jonah will need to lose some of his knowledge so as to rouse himself to his own distance from God.
— The Murmering Deep, p.90 (citation)

There is so much to say about “maybe” and Jonah, in fact, that I wrote a separate drash, complete with several different versions of the mid-20th Century song, “Maybe.”
See “Maybe: Janis Joplin, the Chantels, and Jonah.”

Meanwhile, Jonah remains steadfast in what he thinks he knows. 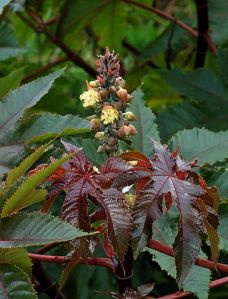 “Ricinus March 2010-1” by Alvesgaspar – Own work. Licensed under CC BY-SA 3.0 via Wikimedia Commons.

The JPS Commentary, by Uriel Simon, says that Jonah is operating under “an error that cannot be eradicated from his heart by additional information” — a description I thought worth pausing to consider: How often these days do we find that no amount of additional information shifts anyone’s point of view?

…In any case, Jonah can only be relieved of his error, Simon continues, “by personal experience that will open his yes to a clearer perception of himself, other human beings, and his God.” The experience Simon means is the surreal episode with the kikayon plant, created and destroyed by God as an object lesson for him.

This small thing that seems to matter so much crystalizes another, related themes in the Book of Jonah.

In the play, Harvey, Elwood P. Dowd explains to asylum staff how he and his large white — invisible to most people — rabbit roll:

Harvey and I sit in the bars… play the juke box. [People] come over… and they sit with us… and they talk to us. They tell about the big terrible things they’ve done and the big wonderful things they’ll do. Their hopes, and their regrets, and their loves, and their hates. All very large, because nobody ever brings anything small into a bar. And then I introduce them to Harvey… and he’s bigger and grander than anything they offer me. And when they leave, they leave impressed.

Similarly, I think, nobody ever brings anything small to the Yamim Noraim [Days of Awe]. Anything any one of us carried here today is large to at least one person. So we are surrounded by big things.

And there are a lot of big things in the Book of Jonah. Some form of the word “gadol” [“big” or “great”] appears at least 14 times in this 47-verse book. (The “big” appearances — 14 or 15 of them — are not evenly distributed: there are none in his psalm. For more on the latter point, see “…to conclusions.”)

When Jonah meets big things — a great city, a great storm, a great wind, great fears of the sailors, and a great fish — they make little impression on him. So I think we’d do well to ask ourselves: Are we oblivious to what looms large to others?

Zornberg points out that it’s only at the end of the book, when God’s reaction to Nineveh’s repentance is a “great evil to him” and later when the kikayon plant brings him “great joy,” that Jonah experiences anything big himself. Maybe this book, then, is also asking: What is the point of lofty language and rousing music and big ritual if we don’t let it enlarge us?

And I think one point of this book, as of this meandering drash, is that Jonah is trying to warn us that going through the motions won’t be enough in the end.

In addition, if, like me, you are wondering why we’re burdened with this surreal story of unspecified evil, cattle in sackcloth, and an argument over a vine and its fruit at this particular point in the service [Jonah is read in the afternoon service of Yom Kippur], just when a reading with some sense of closure, as we approach Neilah [the closing service of the long Day of Atonement], would be most welcome…

My study partner, Amy Brookman, suggested that the placement of the story here might purposely serve to counteract that urge for closure, cautioning us that the work of teshuva is not done when the gates of this particular season are closed.

Returning for just a moment to Harvey…

The asylum doctor keeps asking about Harvey’s name, expecting Elwood to reveal that the name recalls a loved one, perhaps a childhood companion:

“Think carefully Dowd…Didn’t you ever know anybody by that name?” the doctor practically begs.

“No, no, not one, Doctor. Maybe that’s why I always had such hopes for it.”

Reminding us to hold out for the possibility of something completely new is part of the function of the Book of Jonah, I think. But most of our relationships are not with magical beings whose very names are unburdened by past expectations. This means that we have corrective repair to do — in our own lives and in the wider world.

And both Harvey and Jonah remind us that there are big things all around us, most of which we will never even glimpse. If we work on opening ourselves, we can expand our horizons, but the Book of Jonah seems to be the culmination of a long ten days nudging us to realize that uncertainty is part of the human condition. We are constantly asked to act with less than the full story, but it will help everyone, I think, if we all keep our lack of knowledge in mind.

…which is what I think David was telling us on Rosh Hashana….

And Jonah exemplifies the need for uncertainty in prayer and in teshuva [return or repentance]. Like Jonah, we may find ourselves unable to pray if we are convinced that we already know everything God is and will be in our lives. And we will find it hard to change direction if we are waiting for certainty about everything on the new road before we step out.

Visit Fabrangen online and/or in person if you’re in or near DC.

Annual high holidays services are free, no-ticket, open to all.

***Thanks to Palm Canyon Theatre for the photo of Elwood and Harvey. I don’t live anywhere near Palm Springs, CA. But anyone who does will want to check out the Palm Canyon Theatre and their amazing 2014-15 line-up. Mary Chase‘s 1945 comedy, Harvey, is oft-performed on stage and has been adapted for the screen, beginning with the 1950 Jimmy Stewart version (reprised for TV with a cast including Madeline Kahn; worth hunting down). Harry Anderson played Elwood for the screen in 1996 (haven’t seen it yet, so cannot comment). More recently Jim Parsons made a great Elwood. The closing photo is from the Universal (1950) picture directed by Henry Koster.
BACK

The Book of Legends 480:102(see Source Materials) cites the ancient Mekhilta; a similar comment appears in Vayikra Rabbah 22:3. See also Steven Bob’s Go to Nineveh: Medieval Jewish Commentaries on the Book of Jonah, p.46, for a related commentary from David Kimhi AKA RaDaK (1160–1235),
BACK

BIG in the Book of Jonah

Zornberg’s essay in Murmuring Deep cites 14, but I see 15:

I’m guessing we agree on those 13 adjectives. Not sure which of these two “gadol-ish” appearances Zornberg is not counting:

One thought on “Surrounded by Big Things: Jonah, Harvey, and Yom Kippur”