Shabbat approaches, and this week’s Torah portion is Shemini (“Eighth [day],” Lev: 9:1 – 11:47; see also “In Praise of Silence” ). It’s one in which women are simply not present — not even, as in the next double portion of Tazria and Metzora, as a source of potential impurity — unless by extrapolation: The portion is largely about kashrut; women have traditionally borne responsibility for keeping a kitchen kosher; therefore, women’s presence is implied. Earlier in Exodus, we learn the name of Aaron’s wife. When Nadav and Abihu die after offering “strange fire,” however we are told that “Aaron was silent,” but Elisheva is not even mentioned. (Lev. 10:1-3)

It is worth noting, I think, that this woman-less portion closes out the week of Gevurah [“strength” or “boundaries”] in our omer journey away from oppression. Jews, and Jewish feminists in particular, have been grappling for a long time with the ways the Torah defines women, when it isn’t ignoring them entirely. And this seems a good time to focus our attention on the ways in which Black women have been defined by others when the narrative isn’t ignoring them entirely.

No other group in America has so had their identity socialized out of existence as have black women. We are rarely recognized as a group separate and distinct from black men, or as a present part of the larger group “women” in this culture. When black people are talked about, sexism militates against the acknowledgement of the interests of blck women; when women are talked about racism militates against a recognition of black female interest. the focus tends to be on black men; and when women are talked about the focus tends to be on white women.
Ain’t I a Woman: Black Women and Feminism. Boston, MA: South End Press, 1981. (p.7)

And today, hooks’ observations apply in many places where race and gender and oppression intersect. (More on this as our journey continues.) But one key place revisited over and over is the media is the corner of sexuality and feminism.

In an interview last year, feminist scholar Heidi Lewis was asked about Beyonce’s Time Magazine cover (May 5, 2014) and her characterization as “feminist.” Lewis refused to engage in labeling but suggested that the term “feminism” itself may be somewhat limited:

Well, one of the things that I would say is that I’m not really all that interested in labeling somebody else a feminist or not because black women have had a long history of being misnamed and mischaracterized by so many people outside of our communities. Toni Morrison has this great quote from her book “Beloved,” her novel “Beloved,” and it’s that definitions belong to the definers and not the defined….
…a lot of white women were not understanding that there might be a different African-American version of feminism in which a woman might want to use her body as a tool, not someone else use it but she use it as a tool, and it’s just that they could not recognize that.
— Heidi Lewis, assistant professor of feminist and gender studies at Colorado College, on NPR’s Here and Now

On this note, I was struck by a powerful video which appeared in my Facebook feed this week: 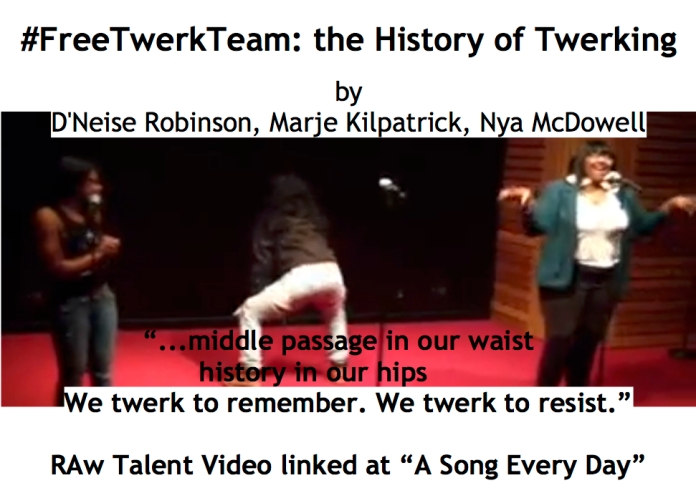 Twerking traces back to patterned Footsteps on African soil
Drums rimmed with lamb skin, Forming Africa in the arches of their backs
Breaking waves in the shore of Their thighs
This black dance looked at as sacrilege instead of art
They applaud Miley Cyrus for popping her ass on Youtube
And glorify the sensual dances of Tango and Salsa
But news reporters look at us like nothing but monkeys in heat

…middle passage in our waist
history in our hips
We twerk to remember
We twerk to resist
— from “#FreeTwerkTeam: the History of Twerking” by  D’Neise Robinson, Marje Kilpatrick, & Nya McDowell

On a slightly related note, some words and images to close out this “strength” week of the omer journey.

It struck me one day, while dancing that the marvelous moves African Americans are famous for on the dance floor came about because the dancers, especially in the old days, were contorting away various knots of stress. Some of the lower-back movements handed down to us that have seemed merely sensual were no doubt created after a day’s work bending over a plow or hoe on a slave driver’s plantation….

From “the Dance Hall” in Senegal

Shared some time back by ColorLines, a project of Race Forward.