Continuing the discussion, at “If a corpse be found…”, about the need for new approaches to meeting our communal responsibilities.

Some possible responses to the trauma and tragedy of multiple murders, particularly in Washington, DC —

Residents in some of the most affected neighborhoods of the District are asking for prayers, calling on everyone in and around the city to #Pray4DC, as one united town. If you know others who engage in intercessory prayer, please pass along this prayer concern. And, however you approach such requests yourself, please keep the need for “one DC” in mind.

Also, if you know members or clergy in other congregations who might be willing to prayerfully acknowledge DC’s losses to homicide — as Temple Micah has begun to do — please ask them to sign up for #SayThisName.

Learn a little about child trauma and how it affects learning and then advocate for trauma-sensitive schools – particularly in Washington, DC. The District also needs trauma-response units to help young people on the scene cope with the violence they too often face.

You will find more background and links to several pertinent resources in this recent feature report from the Education Town Hall.)

For DC residents, please note particularly, that the DC Council held a roundtable on this topic in June and should be poised to act.

This one involves the Grateful Dead — some Temple Micah (DC) people know I hate to let a summer pass without somehow bringing in the Dead. And those who follow such things know this summer is the Dead’s 50th anniversary….

As we began the Standing Prayer, I mentioned the idea of ripples of pain moving outward from a bomb or a bullet and how kindness and prayer can also have a ripple effect. (See “Prayer in the Midst of Bullets and Bombs“)

The #RippleEffect Campaign — named for the Grateful Dead son, “Ripple” — simply involves engaging in acts of kindness or telling about a how an act of kindness affected you… and then encouraging others to do so as well, creating a kindness ripple.

Part of the effort involves social media, for those interested. But it’s certainly not required for the spreading of kindness, or for doing so with the intention of helping to heal all that is broken in DC and beyond. 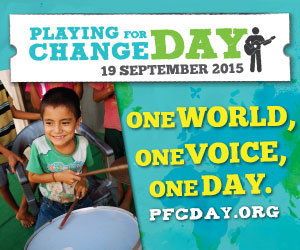 A second goal of the Ripple Effect Campaign is to raise awareness and funds for a project called “Playing for Change” that teaches music and dance to young people around the world, including in the U.S. Playing for Change (PFC) helps youth use music for everything from improving education to resolving conflicts, preserving cultural heritage, and building community, locally, and connections worldwide.

PFC Day — with activities in 61 countries last year — is an annual effort, scheduled this year during the Days of Awe.

This day of music, peace, and change keeps instruments, music instruction, and inspiration flowing to children around the world, … and contributes to positive vibration that connects and inspires us all.

Justice, Justice you shall pursue

The related dvar Torah, “If a corpse be found…”, continues the discussion of ripples — ones of pain, outward from bullets and bombs, and ones of healing.

Is anyone else interested in pursuing a Playing for Change activity in DC and/or the Jewish world?