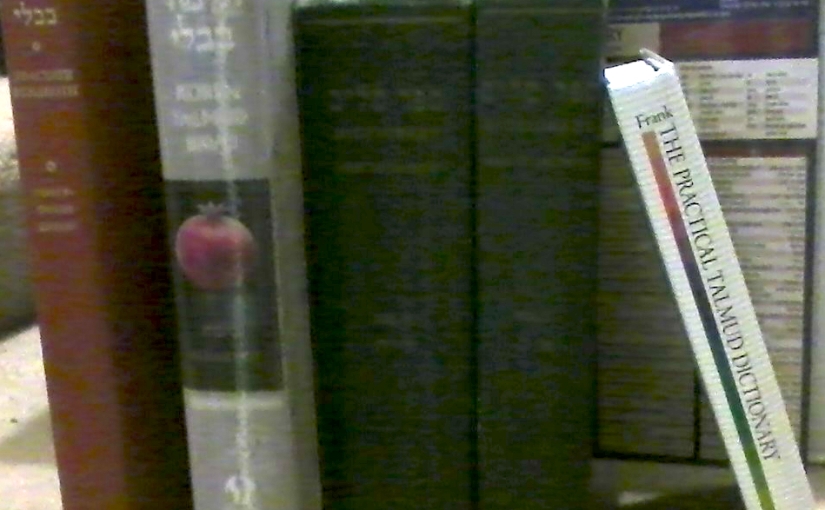 In addition to exploring sources and methodologies used for decision-making in the Daf Yomi pages, it seems important to consider challenges the Sages faced outside the academy and worries they express. In Berakhot 8-10, worries include outlaws in the neighborhood, future enslavements, and bizarre accusations:

The rare inclusion of a woman teaching another scholar — as well as the powerful model of one partner approaching another about an issue of theology and practical behavior — is worth noting, perhaps for future exploration. The conversation between God and Moses is another worth exploring. In the spirit of the wider view, sweeping through Daf Yomi, let’s focus on a theme present in all three texts.

Rava, who taught in Babylon in the first half of the 4th Century CE (died c. 352 CE), told his sons to avoid three things:

Several explanations are offered for the latter in the text:

The literal interpretation is then explained with reference to “an incident of Rav Pappa”: Rav Pappa, another Babylonian teacher about 20 years younger than Rava, visited an Aramean woman who asked him to sit on a bed; he refused to do so until she raised the bed cover; when she complied, a dead baby was found there.

A later commentary, “Nissim Gaon” — Nissim ben Jacob (990 – 1062 CE, Tunisia) — suggests that the woman owed Rav Pappa money and planned to accuse him of killing the child and, thereby forcing him into forgiving the debt. This provides motivation for the woman’s actions, but it does not explain, to me anyway, the overall point of this macabre tale.

Is this story meant to explain an existing adage? something akin to “Beware Greeks (even if) bearing gifts”? Is it more like a family tradition of avoiding a certain town,* because of an unfortunate happening there, a tradition repeated over time and distance until it takes on new meaning? Jastrow offers one clue.

Worry as a Rabbinical Source

Owing to Christian censors as well as timid Jewish copyists, many of the passages originally referring to Romans, Christians, &c, have been altered by substituting Arammi, Kuthi, Goy &c, so that only by keen criticism their real application can be ascertained.

This note reminds us of the Rabbis’ situation as part of a minority under Roman rule. The “incident” and the lesson Rava drew for his sons carries some dangerous xenophobia. The casual acceptance of that within some commentary, in future generations (including ours), is also troubling. Still, the text reflects a reality that was ever-present and defining for the Rabbis.

This incident, along with the passages cited above from Ber 10a and 9b, highlight some prominent worries of the ancient Sages: personal safety in a crime-filled world; awareness of repeated national exile and related suffering in history; and, vulnerability to majority populations in the present.

These concerns are part of how the Rabbis saw their world and, so part of how they approached envisioning a new one. Do we see things all that differently? Don’t we have similar worries — and, therefore, similar blind spots we should heed?

Jastrow, Marcus. A Dictionary of the Targumim, the Talmud Bavli and Yerushalmi, and the Midrashic Literature. [standard Talmud reference] Philadelphia, 1903-ish. Partially embedded within Sefaria.org.

Alternate Attribution
As it happens, there is a teaching about avoiding a certain town in another Talmudic passage including the Aramean woman’s bed. In Pesachim 112b, the same teaching about not sitting on the bed appears, along with three other warnings: about seeking to avoid taxes, about standing in front of an ox, and about dwelling in Shekanzib, “because [its inhabitants] are scoffers and will corrupt you to disbelief.” The same three possible interpretations are offered for the Aramean bed. Pesachim 112b mentions “the incident of Rav Pappa” but does not elaborate.

In Pesachim, this set of teachings is attributed to Judah haNasi [the Prince] (often called, simply, “Rabbi”).

Judah haNasi, who lived in Palestine and is credited with editing the Mishnah, died about 80 years before Rav Pappa was born. Moreover, according to Soncino footnotes, Shekanzib was a Babylonian city, and Judah haNasi “would have had no occasion to warn his children against living in a town in Babylonia.” This suggests to some scholars that the attribution should instead be to Rava (as in Berakhot 8b).

Discussing text from this week’s Torah portion (Toldot, Genesis 25:19-28:9), I quoted yesterday comments about “The Isaac Complex” from Israel in Exile (Albertz). I noted my surprise at the author’s declaration that a particular verse “makes sense only” in a very specific historical context. I even created a little homage to the mouse’s “long tale” in Alice’s Adventures in Wonderland, to help explain my befuddlement and lead into my plea for comments about this on-going #ExploringBabylon series.

Today, thanks to Woodstock Theological Library at Georgetown University, and their open-stacks policy, I was finally able to do some more relevant reading. Among the interesting and useful things I encountered was a response to Israel in Exile in the 2012 volume, By the Irrigation Canals of Babylon.

Ralph W. Klein’s essay, “Israel in Exile after Thirty Years,” begins from the perspective of his own similarly titled work. In discussing Albertz’s book, Klein includes a substantial passage on use of the same word that had caught my notice: “only.”

Klein points out that Albertz dates biblical material based on a small number of passages and “how well they seem to fit a specific historical context, or even the claim that they only fit that context.” The first of Klein’s six examples is the one I quoted yesterday, Gen 26:1-5, about God’s command to Isaac not to go down to Egypt (Albertz, p.249). Klein continues:

In every one of these six cases, I can easily imagine other circumstances that may have been the context for these words. The condemnation of the voluntary migration to Egypt in Jeremiah is explicitly condemned for other reasons than the one labeled “only” by Albertz. Ezekiel’s condemnation of the false prophets of salvation in 13:9 fits easily, in my judgment, into his activity before the fall of Jerusalem 60 years earlier than Albertz allows. Albertz dates Gen 12:1-3 confidently to the mid-sixth century, but I remember a time when Hans Walter Wolff dated it with equal confidence to the tenth century.
— Klein, “Israel in Exile after Thirty Years,” p.15

NOTE: I had looked for reviews of Albertz’s Israel in Exile, and expected to find additional work building on his, but clearly I was not looking in the right places. Delighted to find at least one scholar objecting to his “only” and the otherwise decisive nature of his compositional theories. Hoping to find more.

Klein’s essay goes on to stress that engaging with aspects of Israel in Exile is mean to further conversation on the work of Albertz, “from whom we all have learned so much.” Klein encouraged the Exile group within the Society of Biblical Literature to “debate which biblical voices speak to and from the biblical exile, and when we think they do so.”

He also added, in a footnote:

I recognize that other participants in this consultation want to widen the discussion to deal with the issues of landlessness or the migration of peoples at different points in Israel’s history. These are legitimate theological and historical questions. My essay, however, has sought to define what is meant by the exile in the more narrow sense of the sixth century B.C.E.
Klein, p.19

And a cursory review of SBL happenings and publications suggests that focus following this paper was, indeed, on the wider “migration” themes, rather than defining exile.

Ralph W. Klein is now Christ Seminary-Seminex Professor Emeritus of Old Testament, Lutheran School of Theology at Chicago. In addition to Israel in Exile: A Theological Interpretation (Minneapolis: Fortress Press, 1979), he has a lengthy list of publications (scroll down).

“Israel in Exile after Thirty Years,” is the opening essay IN By the Irrigation Canals of Babylon: Approaches to the Study of the Exile (John J. Ahn and Jill Middlemas, eds. NY: T&T Clark, 2012).

Exile: Babylon and Beyond

Exile saturates Jewish sacred text, practice, and thought. From the first couple’s banishment from Eden, early in Genesis, to the Babylonian captivity, which closes Second Chronicles, the Hebrew bible is filled with themes of loss, wandering, and desire for return. Even the Exodus, Judaism’s foundational tale of escape from human oppression and entrance into service of God, carries a strong exilic theme: “Remember you were strangers in the land of Egypt.”

An arc similar to the path of the Tanakh [Hebrew bible] – from Creation, with its seeds of exile, through Revelation, toward Redemption; and then back to exile again – is repeated in practice, over the course of each Shabbat, across the annual festival cycle, and in the schedule of Torah readings.

Deuteronomy closes with the People on the banks of the Jordan, hopeful but not yet home; we never pass this point, in the annual reading cycle (an invention of Jews in exile), instead linking “Never again was there a prophet in Israel like Moses….” immediately to “In the beginning.” Before the very first portion ends, Eve and Adam have already been expelled from Eden.

Moreover, Babylonian captivity infuses centuries of Torah interpretation and Jewish philosophy: After Babylon, Jews can never un-know that, however close to the promised Land we get, exile is always just beyond the horizon….And that holding onto the “Promised Land” will be harder and require a more sustained ethical commitment than we’ve managed so far.

But Babylon has many meanings and values in- and outside Judaism.

In the Torah, Babylon [Bavel] is the site of the Tower and neighbor to town of Ur, from which Abraham’s family set off and later returned in search of spouses. Prophetically, Bavel is both a threat, a consequence for misbehavior, and the city whose welfare we are told to seek (Jer 29:7). Historically, Babylon is a foreign cultural center, the site of one of the ancient world’s longest lasting, most developed, and most diverse settlements. It is also the base of much creativity, including centuries of aggadah [lore] and halakhah [law] still central to Judaism.

For Jews, Babylon eventually becomes a crazy patchwork of motifs: distant origin, traumatic captivity, and creative center. Christians, Rastas, and others bring additional perspectives. In U.S. politics, Babylon has become a cracked mirror reflecting tyrants, colonizers, and oppressors – who, all too often, look disturbingly like us.

More on “Exploring Babylon” project at “A Song Every Day”