UPDATE, 11/15, 13:36: Both the Jewish Telegraph Agency and the Forward have replaced the original photo with different ones: JTA’s article is now accompanied by a photo of an open Torah held by jacketed arms, adorned with a prayer shawl; the Forward‘s new photo shows three males in kippot (head coverings) with dreidels (Chanukah tops). Neither photo seems to have any relationship to non-Jews at the Torah, but the one that was clearly a mistake is now gone. No correction or apology in either place, however, and it is not clear whether JTA is correcting the mistake with other outlets that might be using their article.


On August 11, 2010, a DC-based group of women and men held a Rosh Hodesh service in solidarity with Women of the Wall. Here is the August 2010 account. 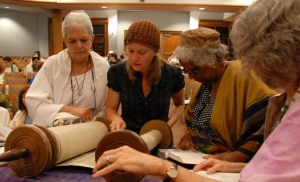 Note the identification of Nannette Herlands (DC Minyan), Torah reader, and Sabrina Sojourner (Temple Micah and Temple Beth Emet [independent]), Gabbai. These two women are visible in this photo — the one in the hat, reading the Torah, and the one in tallit and kippa serving as gabbai, respectively — along with two women (no head coverings) who had been called to the Torah for aliyot.

It is beyond puzzling, therefore, that this photo should appear in today’s
Forward with a caption claiming that “a non-Jewish woman is among those at a Torah reading at Adas Israel Congregation.”

A) All present are Jews, so this photo says nothing about including non-Jews in the Torah service.

B) While Adas Israel served as host, this was a cross-community event, so this photo says nothing about Adas policies.

C) No one from Adas or from the group that is now Washington Friends of Women of the Wall is quoted in this story.

So: which woman does JTA/Forward, and the “award winning” Uriel Heilman, think is a non-Jew and why?


It is ironic that a photo from a service in solidarity with Women of the Wall — women whose Judaism is questioned all the time, often because of their dress — should appear in this context.

NOTE PLEASE: As the wife of a non-Jew with two children who have celebrated many a life-cycle event in and around the Torah, I have much to say about non-Jews in the Torah service. But this photo has nothing to add to this conversation.

As a journalist I am ashamed of this failure to check facts and bias, which reflects badly on us all.

One thought on “Who Is a Jew and how would the Forward recognize her?”