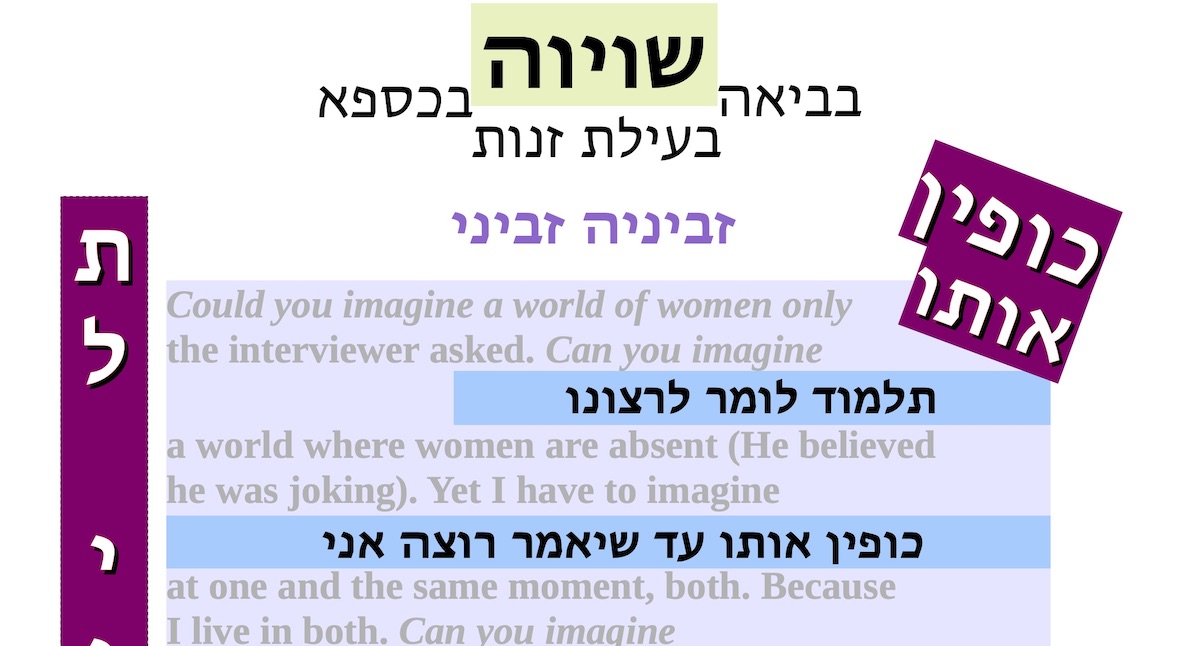 And whenever God sits upon His Throne of Glory He immediately thinks of the blue thread of the fringes worn by Israel, and bestows upon them blessings.
— footnote in Soncino edition, Chullin 89a

Does the color sapphire [sapir] somehow remind God of tekhelet [the blue of ritual fringes]? Or are the blues and God’s thoughts linked some other way? Are blessings contingent on the fringes? The process or causality described here is obscure to me. But I think the image can still inform this thread exploring tzitzit and “light” (minor) commandments. The key seems to be the importance of connection.
END_OF_DOCUMENT_TOKEN_TO_BE_REPLACED

Rami bar Tamri, a traveler from another town, engaged in behavior contrary to local custom and apparently contrary to Jewish law. He was brought before R. Hisda. After inquiring into several other matters, R. Hisda asked Rami bar Tamri why his coat was missing tzitzit [required ritual fringes].

[Rami] replied. ‘The coat is borrowed, and Rab Judah has said. A borrowed coat is, for the first thirty days, exempt from the zizith.’ While this was going on a man was brought in [to the court] for not honouring his father and mother. They bound him [to have him flogged], whereupon [Rami] said to them. ‘Leave him alone, for it has been taught. Every commandment which carries its reward by its side does not fall within the jurisdiction of the Court below.’** Said [R. Hisda] to him. ‘I see that you are very sharp.’ He replied. ‘If only you would come to Rab Judah’s school I would show you how sharp I am!’
— Babylonian Talmud, Chullin 110a-110b

**The commandment to honor parents is listed with its reward “by its side”: “Honour thy father and thy mother, that thy days may be long upon the land which the LORD thy God giveth thee.” (Exodus 20:12)

Leaving for another day’s discussion the relationship of tzitzit, commandment and reward…
END_OF_DOCUMENT_TOKEN_TO_BE_REPLACED

UPDATE, 11/15, 13:36: Both the Jewish Telegraph Agency and the Forward have replaced the original photo with different ones: JTA’s article is now accompanied by a photo of an open Torah held by jacketed arms, adorned with a prayer shawl; the Forward‘s new photo shows three males in kippot (head coverings) with dreidels (Chanukah tops). Neither photo seems to have any relationship to non-Jews at the Torah, but the one that was clearly a mistake is now gone. No correction or apology in either place, however, and it is not clear whether JTA is correcting the mistake with other outlets that might be using their article.
END_OF_DOCUMENT_TOKEN_TO_BE_REPLACED

MISHNAH. IF ONE FINDS SCROLLS, HE MUST READ THEM EVERY THIRTY DAYS; IF HE CANNOT READ, HE MUST ROLL THEM. BUT HE MUST NOT STUDY [A SUBJECT] THEREIN FOR THE FIRST TIME. NOR MAY ANOTHER PERSON READ WITH HIM.
— Babylonian Talmud, Baba Metzia 29b

The Mishna passage goes on to include care of other found items: cloth, which must be shaken once every 30 days and aired out; silver and copper vessels, which are to be “used for their own benefit, but no [so much as to] wear them out”; and gold and glassware, which “may not be touched until Elijah comes.”

The Gemara then proceeds to discuss how to treat a borrowed Torah scroll:

END_OF_DOCUMENT_TOKEN_TO_BE_REPLACED

The number 30 appears thrice, as it happens, in a brief Talmudic discussion of the Rabbi Eliezer’s teaching style:

Our Rabbis have taught: It happened that R. Eliezer passed the Sabbath in Upper Galilee, and they asked him for thirty decisions in the laws of Sukkah. Of twelve of these he said, ‘I heard them [from my teachers]’; of eighteen he said, ‘I have not heard’…. They said to him, ‘Are all your words only reproductions of what you have heard?’ He answered them, ‘You wished to force me to say something which I have not heard from my teachers. During all my life [I may tell you] no man was earlier than myself in the college, I never slept or dozed in the college, nor did I ever leave a person in the college when I went out, nor did I ever utter profane speech, nor have I ever in my life said a thing which I did not hear from my teachers.’
— Babylonian Talmud, Sukkah 28a

The passage goes on to describe a similar set of habits ascribed to Eliezer’s teacher, R. Johanan ben Zakkai, concluding: “…so did his disciple R. Eliezer.” This is followed by more background on Eliezer’s teacher:

Our Rabbis have taught: Hillel the Elder had eighty disciples, thirty of whom were worthy of the Divine Spirit resting upon them, as [it did upon] Moses our Master, thirty of whom were worthy that the sun should stand still for them [as it did for] Joshua the son of Nun [cf. Josh. 10:12ff], and twenty were ordinary. The greatest of them was Jonathan b. Uzziel, the smallest of them was Johanan b. Zakkai. They said of R. Johanan b. Zakkai… [see below]… And if the smallest of them was so great, how much more so was the greatest?

“They said of R. Johanan ben Zakkai” that he did not neglect the following areas of study:

It is interesting to compare Rabbi Eliezer’s extreme conservatism — refusing to teach anything not received directly from his teacher — with the description of his teacher’s varied background. In particular, several forms of exegesis are within R. Johanan’s expertise, while R. Eliezer refuses to engage in his own decision-making, in the passage above and elsewhere in the Talmud.

It’s noteworthy, too, that “Our Rabbis” are recalling these teachers, presumably from some distance. Rabbi Louis Jacobs suggests that generations after R. Eliezer viewed him with some suspicion, noting Eliezer’s famous excommunication as a result of his failure to abide by majority decision.

See also: The essay on Wikipedia about Talmudic Hermeneutics and this additional note on R. Eliezer.
END_OF_DOCUMENT_TOKEN_TO_BE_REPLACED

— * “Shehecheyanu,” for short [full blessing text]
— ** Kolel: The Adult Centre for Adult Jewish Learning presents both blessings as outlined in Berakhot 58b and another option for blessing upon seeing a long-lost friend.
END_OF_DOCUMENT_TOKEN_TO_BE_REPLACED

…STUDENTS MAY GO AWAY TO STUDY THE TORAH, WITHOUT THE PERMISSION [OF THEIR WIVES FOR A PERIOD OF] THIRTY DAYS…
— Babylonian Talmud, Ketubot 61b

END_OF_DOCUMENT_TOKEN_TO_BE_REPLACED

Alternatively, it is 30 days to the charity box obligation and three months to the soup kitchen. This is the way Mishneh Torah [12th Century CE compilation by Moses Maimonides] records the obligation.

This set of questions from the American Jewish World Service probes the themes behind this ruling. Additional pages discuss “the universe of obligation.”
END_OF_DOCUMENT_TOKEN_TO_BE_REPLACED

some notes/resources on the planting and reaping of cucumbers (by magic or illusion), “worship of stars,” R. Eliezer, and Christianity. (posted here for Temple Micah’s Hebrew Poetry group and anyone else interested — and to make use of WordPress’ memory, which is better than mine).
END_OF_DOCUMENT_TOKEN_TO_BE_REPLACED