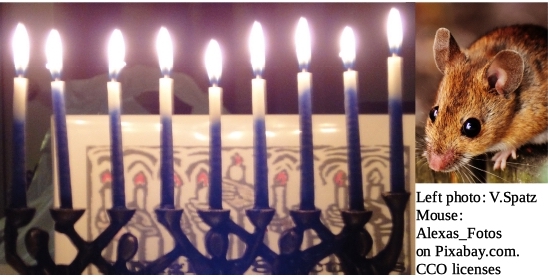 In Perek Shira, as noted in the previous two posts, verses from Psalm 30 join a chorus of praise in which “each of God’s creatures, plants and animals, mountains and rivers, sings out to its Creator in a special way.” Our prayers, are part of a “cosmic symphony” says Rabbi Arthur Green:

The prayers of Israel are recited in a special language and a distinctive form. There is a way in which they belong to the Jewish people and to us alone. But prayer is also a universal act, one that binds the whole human community together with all of nature, calling forth in us an appreciation of life as an ongoing celebration of the gift of being.
— from Kol Haneshemah (citation below)

This idea leads to the commentary in Pesikta Rabbati — medieval commentary on the holidays — which tells us that there were seven dedications, channukot, from dedication of heaven and earth in Breishit to the “dedication of the world to come, because even that has lights…”

20 of 30 on Psalm 30
As a National Novel Writing Month Rebel, I write each day of November while not aiming to produce a novel. This year I focus on Psalm 30 (“Thirty on Psalm 30”) in the hope that its powerful language will help us through these days of turmoil and toward something new, stronger and more joyful, as individuals and as community. Whole series (so far)…. Look for this not-necessarily-novel writing project to extend into Chanukah, which begins just as NaNoWriMo ends, and apologies to anyone who is bothered by the strange posting schedule.

Kol Haneshemah includes select verses from Perek Shira as an alternative P’sukei D’zimrah. Among them is the first Mouse verse, translated as follows:

The mouse says: “I shall exalt you, O REDEEMING ONE, for you delivered me, and gave my enemies no joy on my account.” (Psalm 30:2).

Kol Haneshemah does not include the verse-conversation when the mouse is captured by the cat. See “And the Mouse Says” and “Glory and the Swallow” for more on Perek Shira.
TOP