What would it mean for reports about Dante Servin, armed off-duty Chicago police officer, and Rekia Boyd, the unarmed 22-year-old citizen he shot to death in March 2012, “to be systemically aware” (see yesterday’s post)? 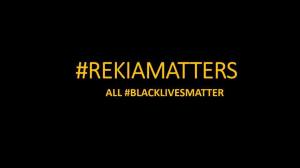 Rekia Boyd’s story is not a straightforward example of the “unarmed suspect shot” scenario: Servin was not attempting to arrest Rekia Boyd. He appears to have been reacting to belief that her boyfriend was armed (he wasn’t), complicating any discussion of police response to Black women. Servin defends his actions by invoking police protocol, claiming: “Any police officer especially would have reacted in the exact same manner” (see video in ABC7Chicago story linked above). But he was off-duty, and he shot Rekia Boyd following a complaint about noise because he “feared for his life.” So, really, it comes down to fear….

The badges and guns belong to us 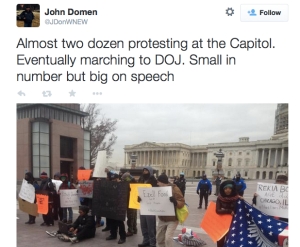 I symbolically embodied Rekia Boyd during a demonstration at the U.S. Capitol followed by a 4-1/2 hour die-in at the Department of Justice on Human Rights Day, December 8, 2014. I chose her name because she was female (like me) and from Chicago (like me). And while I had already left the city by the time I was 22, I feel some connection with a young woman out with friends on her own streets, maybe forgetting that it was late and time to keep the noise down or maybe just forgetting — as my friends and I did often enough — that there were other people around.

During those long, cold hours on the ground outside the Department of Justice, the following passage — one that has stuck in my brain since I first read it — returned to me again and again:

“…Them shootin’ me wasn’t no accident. You don’t take no scared white boys can’t tell the difference between one black man and another, give ’em guns, and let ’em run around the streets of Harlem and then say it was an accident when they one day shoot down an innocent man….”
— Tempest Landry, speaking post-death in Walter Mosley’s Tempest Tales. (NY: Washington Square Press, 2008.)
see also “Declarations of Independence…”

And, while some sectors, particularly Black media, have certainly addressed the topic many times for decades upon decades, mainstream media is still not asking the most fundamental question:

Why do we allow armed police to roam in areas where they fear the residents?

“Those badges and guns belong to us.

That’s a level of systemic awareness I rarely see and believe we must develop, soon.

We counted 19 on the evening of April 22. Tonight, we count….
END_OF_DOCUMENT_TOKEN_TO_BE_REPLACED

[addendum to dvar Torah, “Pinchas and the Scary Friend”]

Many hard-boiled detectives have their “scary friend.” But Ezekiel (Easy) Rawlins’ friend Raymond (Mouse), is something else again. Mouse is written by Walter Mosley as a true psychopath.

To illustrate: At one point early in the series, Easy asks why Mouse has just killed a man, and Mouse responds:

You said don’t shoot him, right? Well I didn’t; I choked… look, Easy – if you ain’t want him dead, why you leave him with me?

On the DVD of “Devil in a Blue Dress,” the only Easy Rawlins story made into a movie so far, there’s a special feature showing the actor Don Cheadle (Raymond, aka Mouse) busting out in laughter the first few times he tries to deliver those lines, so absurd to any sane person. When Cheadle finally gets it, the character he’s created is terrifying. Cheadle’s portrayal helps us understand why Easy would like to distance himself from this man, even as we realize that the detective would be dead without his friend’s help.

The extreme nature of Mouse’s personality makes it all the more interesting, I think, that Mosley wrote this man so deeply into Easy’s life. The author could have chosen to rely on any number of fixers, who show up for a minute, do what needs doing, and then disappear. It happens often enough in this kind of fiction.

“You know,” Mosley observes, “you can have the existentialist detective. He’s all alone; he may know somebody, but that person’s only going to appear in one book, and then it’s over. But Easy, he works with people. He trades favors. That’s part of how he lives.”
— from David Ulin’s LA Times interview with Mosley [paywall might be involved, sorry]

END_OF_DOCUMENT_TOKEN_TO_BE_REPLACED

My original plan, when I was assigned Parashat Pinchas (Numbers 25:10-30:1) to offer a dvar Torah, was to skip over Pinchas and his spear and the matter of God and human vengeance. But that’s not how things worked out. I was drawn in to the Pinchas story first by a brief commentary:

And Israel attached itself unto the Baal of Peor [Numbers 25:3]. R. Eleazar ben Shammua said: Just as it is impossible for a wooden nail to be wrenched from a door without loss of some wood, so it was impossible for Israel to be wrenched from Peor without loss of some souls.
– from The Book of Legends (Bialik & Ravnitsky, 628:175)
— based on Babylonian Talmud Eiruvin 19a

END_OF_DOCUMENT_TOKEN_TO_BE_REPLACED

[Originally posted on Fabrangen e-list, in response to a post, “Certain Unalienable Rights,” by R. Arthur Waskow encouraging “open discussion of what we would today write into such a visionary Declaration of peace, justice, and ecological responsibility, and — perhaps especially poignant in many countries this year what actions we might take to carry out such a Declaration.”]

END_OF_DOCUMENT_TOKEN_TO_BE_REPLACED

I’ve been thinking about the great need for personal teshuva [“return”/atonement] and reconciliation in close relationships balanced against the need for wider teshuva/reconciliation work.

In that spirit, today I picked up Walter Mosley’s newest book, The Right Mistake, the third about philosopher ex-con Socrates Fortlaw. This is not the first time Mosley has released a book on themes of teshuva at the high holidays, and I think he manages to hit the need to work on both the small and the large scales while telling a compelling story.
END_OF_DOCUMENT_TOKEN_TO_BE_REPLACED