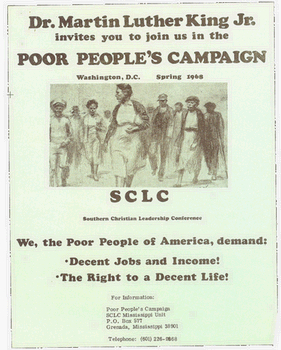 from the King Archive

April 22, 1968 was the original launch date for the Poor People’s Campaign. As we approach the beginning of Passover, on April 22, 2016, the very basic demands of 1968 have yet to materialize. Can your seder, or your Passover week, include some moments to reflect on how far we’ve (not) come in the last 50 years and consider how we might do better?

Here is a link to King’s remarks in the Campaign press release, a month before his assassination.

Here are some sources on the Campaign itself, which drew thousands to Washington, and included Resurrection City, erected on the National Mall in May:

On the other hand, we have seen decades of generational poverty and violence and other oppressive conditions disproportionately affecting communities of color. And one thing which has changed in recent decades is the further development of Whiteness Studies, exploring the facts and impact of systemic racism.

Is there is room in your Passover and Omer practice for THAT maggid, for recalling — and telling the young or uninformed — how it is that Whiteness developed in this country and what it has meant? Follow #WhitenessHistoryMonth on Twitter, and see more below, for some bits to include.

Who can say we’ve actually left? “Wherever you live, it is probably Egypt,” Michael Walzer wrote.

…Do you live in a place in which some people are more equal than others? In America, the unemployment rate for African-Americans is nearly twice as high as it is for whites. Black people are five times as likely to be incarcerated as whites. Infant mortality in the black community is twice as high as it is among whites. America is a golden land, absolutely, and for Jews, it has been an ark of refuge. But it has not yet fulfilled its promise….
[Updated, additional statistics**]
…aren’t we still commanded to bring everyone out of Egypt?
—New American Haggadah (Boston: Little, Brown, 2012)

I believe the “Seeing White” album, with some #WhitenessHistoryMonth contributions is visible to all. (If not, I’ll work on other options.)

Black people in the U.S. are now SIX times more likely to be incarcerated as white people (NAACP), up from five times when New American Haggadah was published. The Sentencing Project finds similar disparity for Hispanic Americans. In addition, here is the growing disparity for U.S. school children:

A coffin in Egypt closes the Book of Genesis (Genesis 50:26), and the Exodus story is launched with a basket on the Nile (Exodus 2:3). Joseph’s death, which closely follows that of his father, Jacob (Gen 49:33), brings to an end the patriarchal stories. With Exodus, the focus shifts to the Israelite story, beginning with midwives Shifrah and Puah, Yocheved (Moses’ mother), Miriam (Moses’ sister), and Pharaoh’s daughter. Our focus is thus shifted, as one book ends and the next begins, from death to birth and from stories of individual and family struggle to a communal struggle toward liberation. So, too, in the United States today, we are moving:

In addition, men dominate at the close of Genesis, while Exodus opens with women in the lead; similarly, women have been primary leaders in the #BlackLivesMatter movement.

The Exodus story looks, on the face of it, like a violent and permanent parting of oppressed and oppressor peoples. But there are elements — particularly evident in watching what the women do at the beginning of the Exodus story — of the tale that can help us learn respectful coexistence.

Failure to dehumanize: The Egyptian midwives model for us at Exodus 1:15-22, using Pharaoh’s racist assumptions about the baby-popping Hebrew women to protect the Israelite community. (more on this)

Vision: Moses’ mother shows immense faith in her Egyptian neighbors, assuming that someone will rescue the child. And at least one Egyptian does rescue a child. Both women, thereby, refuse to dehumanize the other. (more on vision)

Passover is still months away (April 3-April 11, 2015). But Jews and Christians, along with others to whom the Exodus story speaks, can begin now to explore how we can use this ancient tale to change today’s realities, in our own communities and beyond. A few more “Passover Lessons” —

What else can we learn?
Let’s start now to figure it out!
And let’s NOT WAIT to begin learning and acting
END_OF_DOCUMENT_TOKEN_TO_BE_REPLACED

Now when a man becomes aware that he is falling asleep and begins to nod and he is afraid that a strong, heavy sleep may overcome him, the best advice for him is for him to request his friend to wake him from time to time or that he should go among people where a light shines brightly….the friend should know something of the great loss sleep brings and how necessary it is to awaken the sleeper…
— from R. Aaron Roth‘s “Agitation of the Soul” [1934] IN The Schocken Book of Jewish Mystical Testimonies: A unique and inspiring collection of accounts by people who have encountered God from Biblical times to the present, NY: Schocken, 1997. Louis Jacobs, translation/commentary

Passover seems to me one of the times when Jews are called upon to reflect on past awakenings and to commit to awakening themselves and others.
END_OF_DOCUMENT_TOKEN_TO_BE_REPLACED

for the family of Trayvon Martin, all mourners, and toward justice for all
END_OF_DOCUMENT_TOKEN_TO_BE_REPLACED

With the repeated destruction of local and central sanctuaries, the power of the sacrificial system necessarily diminished. The decline of sacrifice did not end Jewish concern with food, but channeled it in a different direction. Meat-eating became separated for sacrifice, and non-sacrificial forms of worship flourished.

Rabbinic Judaism, the new form of Judaism established after the destruction of the Second Temple in 70 CE, elevated non-priestly and non-sacrificial values and institutions to central importance. The primary avenues to God became Torah study, prayer, deeds of lovingkindness, and fulfillment of the countless ritual observances established by the Rabbis. These activities had not been part of the hereditary priestly system and therefore were not prohibited for women or non-priestly men. This change gave a greater religious role to those who had stood on the periphery of the religious order.

The Rabbis transformed the sacrificial rites of the Temple into domestic table rituals….Passover sacrifices became a family feast of highly symbolic foods….The Rabbis composed dozens of berakhot (blessings) to be said over food and after eating. The holiness that was previously contained within the sacred precinct of the Temple extended into homes and community. Sanctified food, which once referred to the food designated for sacrifice, now meant the food prepared for every Jewish family’s use….

Popular tradition teaches that Jews have been “the people of the book,” prizing Torah study above all. This is only partly true. Rabbinic Judaism made us “the people of the table” as well. The table was at the center of every Jewish dwelling. Laden with food, with books stacked up in the empty spaces, it substituted for the altar.
— Jody Elizabeth Myers, from “The Altared Table: Women’s Piety and Food in Judaism,” IN Lifecycles Volume II*

The “Opening the Book” series was originally presented in cooperation with the independent, cross-community Jewish Study Center and with Kol Isha, an open group that for many years pursued spirituality from a woman’s perspective at Temple Micah (Reform). “A Song Every Day” is an independent blog, however, and all views, mistakes, etc. are the author’s.

Four verbs in Exodus/Shemot 6:6-7 form the basis for the Rabbinic requirement of four cups at the Passover seder:
END_OF_DOCUMENT_TOKEN_TO_BE_REPLACED

A kosher and joyful Passover.

News and views from the Jewish Women’s Prayer conference coming.